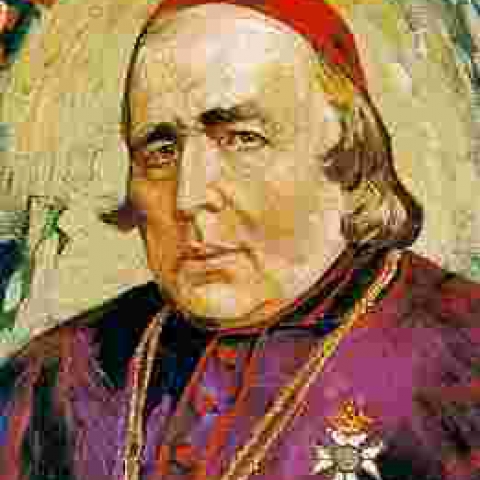 Mgr Joannes Zwijsen founded the Congregation of Sisters of Charity of Our Lady, Mother of Mercy (SCMM) on 23 November 1832.

Our founder was born into the family of a miller in Kerkdriel, situated in the Dutch Province of Gelderland, on 28 August 1794. On 20 December 1817 he was ordained priest.
From 1832 until 1842 Zwijsen was parish priest of 't Heike in Tilburg. The majority of his parishioners consisted of textile workers and day labourers. Although they worked hard, they only earned a slender income. The social circumstances were extremely bad and child labour in factories and workshops was very common in those days. Fr Zwijsen was touched by the concrete needs of his parishioners. That is why he founded two Congregations: the Sisters of Charity (1832) and the Brothers of Tilburg (1844). The aim of both Congregations was to dedicate themselves to education and health care for the benefit of the poor and marginalised in Tilburg.

Joannes Zwijsen started the Congregation of the Sisters of Charity with three beguines from the little Belgian town of Hoogstraten. These women chose not to marry but to dedicate themselves to the poor within Fr Zwijsen’s parish. They began to do this work in a small house in Piusstraat, Tilburg. Their second house, the façade of which still exists, is called “the house with the 13 cells’.
On 5 February 1834 the sisters – who now numbered six – took their religious vows in the parish church of 't Heike in the presence of Fr Zwijsen, their founder. On that same day and before the religious profession a superior had been elected.

Thus Mother Michael Leysen became the Congregation’s first Superior General.
It was Zwijsen’s intention not to admit more than 13 sisters to his Congregation. However, because of the great demand for help in education and health care he had to abandon this principle quite soon. He agreed to an extension of his Congregation. When Monsignor Zwijsen died on 16 October 1877, the Congregation comprised about 1500 members and had expanded beyond the Dutch borders to Belgium (1840), England and Wales (1861) and the United States of America (1874).
Besides teaching, the sisters dedicated themselves to the care of orphans, the elderly and the handicapped and to nursing the sick in the Netherlands and elsewhere. In the twentieth century the tasks of religious in nursing, care of the elderly and education in Western Europe were almost entirely taken over by lay people. This also happened to the Congregation of the Sisters of Charity. Today, in a spirit of compassion, the sisters try to dedicate themselves to the needs of our times in their own particular way.

In the pas forty years, great changes have taken place in religious life as well as in the life of the Sisters of Charity. In the Western countries, the major 'works of mercy' (education, care and mission) were passed on the laity. Sisters do not wear a habit any longer, they sometimes live on their own small groups and together the look for new ways of religious life. In the Third World, where the sisters'average age is much lower, they are still amply engaged in educational and care projects. One aspect of their worldwide work remained unchanged, i.e. the collective effort to stand up for the needy. A sister put it like this: "Works of mercy will always continue to exist".